Tomorrow, the first conditionally touristic suborbital flight of the “space” aircraft SpaceShipTwo of the British billionaire Richard Branson’s Virgin Galactic company will take place. The day before in Twitter Blue Origin by another billionaire – Jeff Bezos (Jeff Bezos) – there was a message that the spacecraft Virgin Galactic did not recognize the flight. According to Blue Origin, space begins above the ascent point of the Virgin Galactic spacecraft.

SpaceShipTwo Virgin Galactic suborbital aircraft takes off from a modified cargo ship (air launch) and rises on its engines to an altitude of about 80 km, where it will spend about 4 minutes in free fall. The plane then returns to the airfield. The new Shepard Blue Origin capsule on a reusable launch vehicle will rise to an altitude of over 100 km, and this mark – the so-called Karman line – is recognized by most international organizations as the limit of space on Earth. Branson’s plane will not reach this line, so his and subsequent flight cannot be considered an exit to outer space.

In another situation, Blue Origin would not have focused on the altitude of the Virgin Galactic aircraft and its capsule. But in this case, Richard Branson decided to get ahead of Bezos with a flight to “space”. So, if the launch of New Shepard Blue Origin was planned last year, and the rocket made 15 successful flights, then Branson’s decision to fly a little earlier than Bezos and only after three successful launches is a marketing ploy. Therefore, the reaction of Blue Origin is of the same marketing nature – the competitors have not yet grown to space. Only the tourists who fly on New Shepard will become real astronauts. 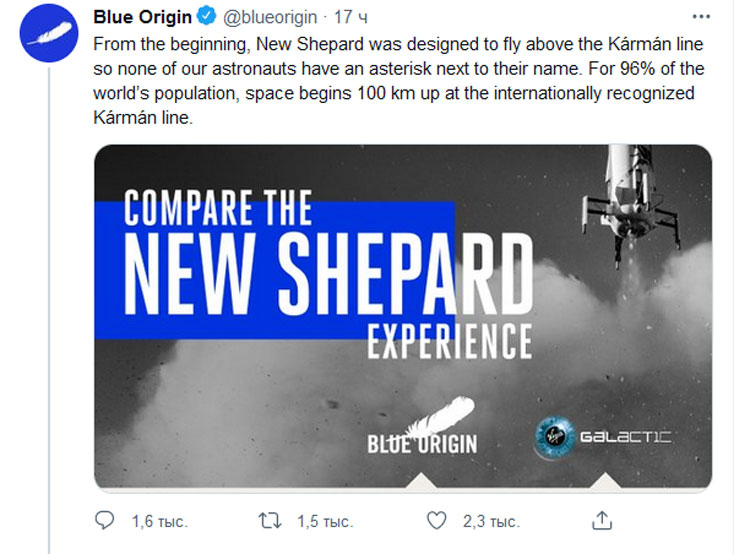 The New Shepard Blue Origin spacecraft will make its first commercial flight 9 days after the Virgin Galactic flight on July 20. For a seat in a capsule with Jeff Bezos, his brother and the 82-year-old American former pilot Wally Funk, an unknown tourist paid 28 million dollars at an auction. The price of a regular ticket to New Shepard has not yet been revealed. The cost of a flight on SpaceShipTwo Virgin Galactic is $250,000. Well, in any case, a new page for space tourism opens tomorrow.


If you spot an error, select it with the mouse and press CTRL + ENTER.