September 21 from place No. 31 in the Baikonur Cosmodrome The Soyuz-2.1a launch vehicle was successfully launched with the Soyuz MS-22 transport crewed spacecraft named after the Russian scientist, inventor and founder of the theory of space exploration Konstantin Eduardovich Tsiolkovsky. A crew of three led by spacecraft commander Hero of Russia, pilot-cosmonaut of the Russian Federation departed for the International Space Station Sergei Prokopiev. The space mission will last for 188 days – until March 28.

“Dear rocket scientists, developers, all participants in the preparation and successful launch, I congratulate you on this important event. Separately, I want to congratulate our compatriots – representatives of RCC “Progress”, Baikonur branch of RCC “Progress” with another successful launch . The fact that another successful launch took place is, of course, a huge contribution of all the workers of RCC Progress, PJSC Kuznetsov, Tyazhmash. Thanks to the work collectives of these amazing companies, the Samara region is the most powerful and leading center of rocket science in our country, which ensures Russia’s leadership in the world,” Dmitry Azarov congratulated the launch participants.

Remember that the Samara region historically plays one of the key roles in space exploration. It was on Samara land that the rocket was created, on which Yuri Gagarin made the first flight into space in the history of mankind. Our launch vehicles have served the country for many decades, launching manned ships and transport ships, automated spacecraft into outer space. Today, largely thanks to the Progress RCC, the Samara region is one of the leading rocket and space centers in Russia. The company participated in almost all major space exploration programs, including the Moon, the creation of the reusable space system Energia-Buran, and was a member of the Soyuz-Apollo international mission.

In 2021, RCC Progress JSC provided 22 launch campaigns: 5 from Vostochny Cosmodrome, 12 from Baikonur Cosmodrome, 4 from Plesetsk Cosmodrome and 1 from Guyana Space Center. And in today’s difficult conditions, the company continues to develop, with confidence in the future.

“Tomorrow is secured by government orders. Your work, your bold decisions, your ideas are needed by our country. As before, outer space works for peace, outer space is a protection for our country, which means it keeps peace on our earth. And I want to wish you good health and new, truly cosmic heights,” the head of the Samara region told the rocket scientists.

Before the start, the governor together with Dmitry Baranov and members of the State Commission escorted the crew to the ship.

Today, the head of the region met with the staff of the Baikonur branch of JSC RCC “Progress” and examined the assembly and testing complex of Soyuz-2 missiles. Head of the complex for the preparation of spacecraft and launch vehicles of the Baikonur branch of the RCC “Progress” Dmitry Semikolenov told the regional manager about the operation of the complex and the process of preparing the carrier for launch. It is here, at the cosmodrome, that the final assembly of the rocket is carried out, and the functionality of all systems and sensors is also checked. All information during the final tests, as well as about the launch of the rocket, is fed to the remote control.

After the successful launch of the launch vehicle, the construction of a joint calculation of the companies of the state enterprise Roscosmos took place. Everyone whose work ensures the launch of launchers and the successful implementation of the tasks established by the Head of State, the Supreme Commander of the Armed Forces of the Russian FederationVladimir Putincongratulated the general director of the state enterprise Roskosmos Yuri Borisov.

Here, at the construction site, Governor Dmitry Azarov handed out well-deserved awards to Samara residents – specialists from the Baikonur branch of RCC Progress JSC, RSC Energia PJSC and TsENKI JSC. For selfless high-performance long-term work, active participation in the development and use of new equipment and advanced technology, success in training and educating young workers, the tester of devices, instruments and sensing elements of the fifth category of the Baikonur branch. the joint-stock company RCC Progress was awarded the Labor Glory label Yuri Kolyukov. 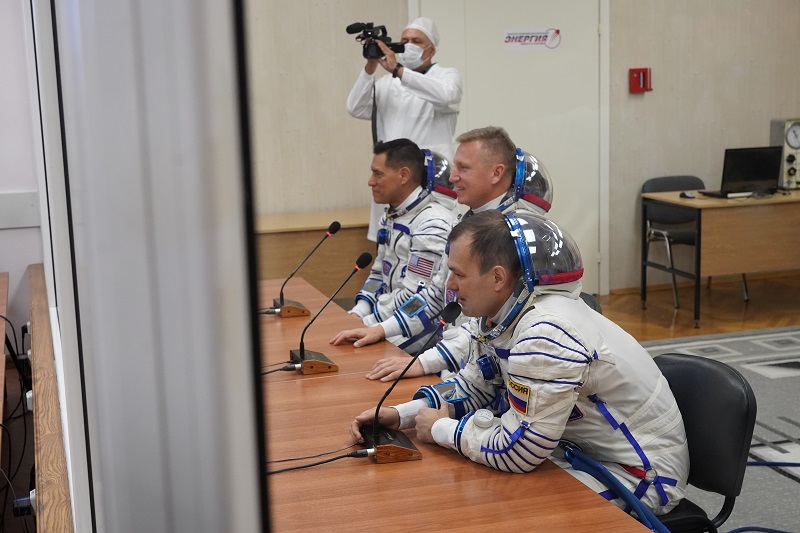 For personal contribution to the preparation and successful launches of rocket and space technology from the Baikonur Cosmodrome to implement state programs and international projects, the head of the service of the Center for Testing Technical Complexes at the branch of the Center for Operation of Ground-based Space Infrastructure – Yuzhny Space Center was awarded a certificate of honor from the governor of the Samara region Ivan Kozlovhead of the Space Test Center, deputy head of the Baikonur branch of the Rocket and Space Corporation Energia named after SP Drottning Vasily Ovchinnikov.

On September 21, the Orthodox Nativity of the Blessed Virgin Mary is celebrated. The head of the region handed over to the head of the Baikonur branch of RCC “Progress” Alexey Gulyaev Icon of the Mother of God by Tashlin. Now one of the most revered icons in Samara will be kept in the branch of the Russian Orthodox Church.

“Today is a great feast for the birth of the Virgin, and I gave you the icon of Tashlin the Mother of God, which was revealed on October 21, 1917 in Samara. And today we are equipping the Tashli Monastery, we have already done a lot and we want it to be a real pilgrim tourist center. I am sure it will,” said the governor. “I would like the help of God and the help of the Mother of God to always be swami.”

“All Samara residents are proud of you, whether you are from the Samara region or from Baikonur. When I come to the most distant corners of our region, they ask me: how is Progress RCC, how is our space. This awareness of their involvement in the great space history of our country lives in the hearts of the residents of the Samara region, and this is supported by your successes and achievements,” the head of the Samara region emphasized.

“It is very important for RCC Progress and the Baikonur branch to understand that the leadership of the region and the people of the Samara region follow our work and success,” answered Dmitry Baranov on behalf of the team.