Aerospace company SpaceX has launched its Falcon Heavy superheavy launch vehicle for the first time since 2019 as part of the USSF-44 mission. The rocket carrying two secret satellites was launched from pad 39A at the Kennedy Space Center in Florida at 09:41 local time (16:41 Moscow time).

Since the USSF-44 mission was carried out in the interests of the US Space Force, accurate information about the payload was not announced in public sources. The Falcon Heavy is known to have carried six payload units. Of greatest importance is USSF-44, which is most likely a military communications satellite. Information about it is classified, so the exact purpose and characteristics of this device remain a mystery.

The rest of the satellites are smaller, and Northrop Grumman’s Long Duration Propulsive ESPA platform is used to deploy them. As part of the current mission, two Lockheed Martin CubeSat spacecraft, equipped with solar panels and designed to operate in geostationary and geosynchronous orbits, went into space. These satellites are planned to be used to test new technologies that are not yet ready to be integrated into more massive satellites.

Another pair of payload units were miniature units in USUVL and WL2XOU CubeSat formats. Almost nothing is known about the purpose of these devices. It is only reported that they are designed to operate in a geostationary and/or 2.8° inclined supersynchronous orbit. The latest miniaturized TETRA-1 satellite is built by Millennium Space Systems, a subsidiary of Boeing. Created for the US Space Force, it is the first of four NENRA vehicles to be manufactured by three different companies. TETRA-1 will test the ability to maneuver in orbit, as well as provide a training scenario for new and experienced satellite operators. 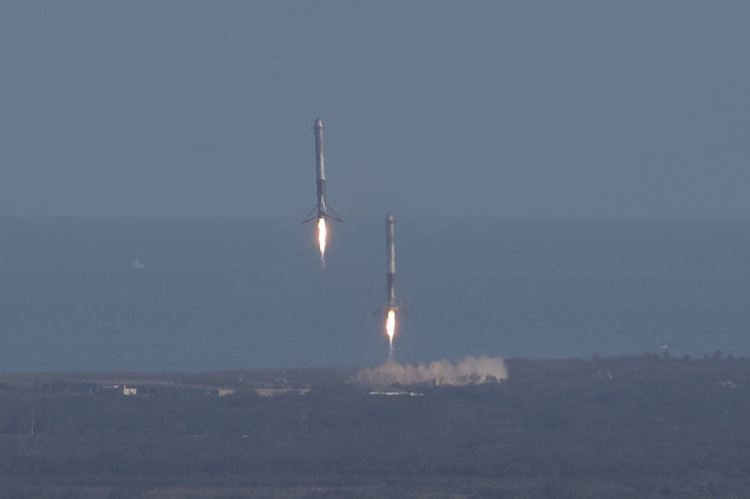 During previous launches, the side boosters on the Falcon Heavy rocket made controlled landings at Cape Canaveral’s launch site, while the central booster landed on a dedicated SpaceX floating platform in the Atlantic Ocean with varying success. To accomplish the mission with USSF-44, the company was forced to abandon the controlled landing of the medium booster in order to maximize the fuel supply to launch satellites into a given orbit. Instead, it fell into the ocean off the coast of Florida, and the side boosters made a soft landing at the spaceport.

Presumably, the current launch will be the last for the Falcon Heavy in the status of the most powerful of the active missiles in the world. The US National Aeronautics and Space Administration (NASA) is preparing to conduct the first orbital launch of the giant Space Launch System rocket as part of the Artemis-1 mission. If everything goes according to plan, the launch of this rocket will take place on November 14, after which the status of the most powerful rocket in the world will pass to it.