Fifty years ago, on March 18, 1965, a man exited the spaceship and found himself face to face with the infinity of the universe. This first step was taken by Alexei Arkhipovich Leonov. M24.ru tells how it all started and how cosmonauts are now preparing for space walks.

The first spacewalk took just over 20 minutes. It was an experiment where it was planned to determine whether a person could navigate and work outside the ship. Cosmonauts Alexei Leonov and Pavel Belyaev were selected for this mission.

The launch was scheduled for March 18. The day before, an analogue ship was launched, which exploded on landing. Then Sergei Korolev proposed to transform the unit on which Leonov and Belyaev would fly into a drone in order to calculate the flight schedule again. But then the flight would have to be postponed for nine months – until the construction of the new ship was completed. The astronauts decided to fly.

“There were seven serious emergencies during my flight, three or four of which were fatal,” Alexei Leonov recalled after returning to Earth.

The first spacewalk took 23 minutes and 41 seconds, of which Leonov spent 12 minutes in open space.

Problems arose when returning – due to the space suit swelling in a vacuum, the astronaut could not enter the ship as expected. And then Leonov decided to break all instructions, to act without a report: “If I had reported to Earth, I would have had to gather a commission there, elect a chairman, listen to me, confer. I would have died during this time . “

I tightened all the straps, but the suit was so swollen that my hands went out of the gloves when I grabbed the rails, and the legs out of my boots. In this state, of course, I could not squeeze myself into the airlock door. A critical situation arose and there was no time to consult with the earth. Pasha Belyaev saw this, but could not do anything to help.

If I break all instructions and do not inform the earth, I switch to a pressure of 0.27 atmospheres. This is the second way of working for the spacesuit. If the nitrogen at that time had not been rinsed out of my blood, then the nitrogen would have boiled – and that is … death. I thought I had been under pure oxygen for an hour and that there would be no boiling. After I switched to the second mode, everything “sat down” in its place. Nervously, he inserted a film camera into the airlock and, contrary to the instructions, he entered the airlock not with his feet but with his head forward.

I grabbed the handrail and pushed myself forward. Then I closed the outer hatch and started to turn around, because you still need to go into the ship with your feet. Otherwise I would not have been able to, because the lid, which opens inwards, ate 30 percent of the cabin’s volume. Therefore, I had to turn around (the inner diameter of the airlock is 1 meter, the width of the suit at the shoulders is 68 cm). Here was the biggest load, my heart rate reached 190.

Once in the open, Alexei Leonov took the first steps along this abyss – he walked five times from the ship by five meters and returned.

“I went out, looked – in front of the Black Sea, Romania, Italy, raised my head – the Baltic Sea and the Curonian Spit. And quiet, silent. I hear my heart beat, I hear my breathing.! The man went out into the open space and is in free-floating. “My first thought is” Who is it about? – remembers the astronaut.

Now humans can work in space for hours. The astronauts repair the station, install equipment. All actions are known and elaborated many times on Earth and the ISS. Reports that a person has gone off the ship are not perceived as something strange.

Step into the abyss:

When you are at the station you feel protected, the field of view is always limited by the cab valve, and there you see all this infinity, an infinite abyss. This is a completely different look. On earth we are used to seeing the sky. In space you see the same sky, as long as you look at it not from below, but as from within. It seems that this is such an enormous abyss that it is difficult to imagine what will happen next.

Before going to the ISS and embarking on a spacewalk, astronauts carefully perform all operations on Earth. Exercise takes place in a special pool, because swimming is like moving in an airless space, and diving under water is similar to a state of weightlessness.

At the Cosmonaut Training Center named after Yu.A. Gagarin, there is a hydropower laboratory, where they work with the main business. Astronauts are immersed in a tank that is 12 meters deep. The difference from real conditions is that they wear spacesuits connected to an external air source, and in case of emergency they are accompanied by divers.

The preparations for the exit to the station take two to three weeks, this takes place in parallel with other experiments on the ISS. Behind the fact that from the ground it seems to be almost a fantastic film lies a long and precise development of all actions. 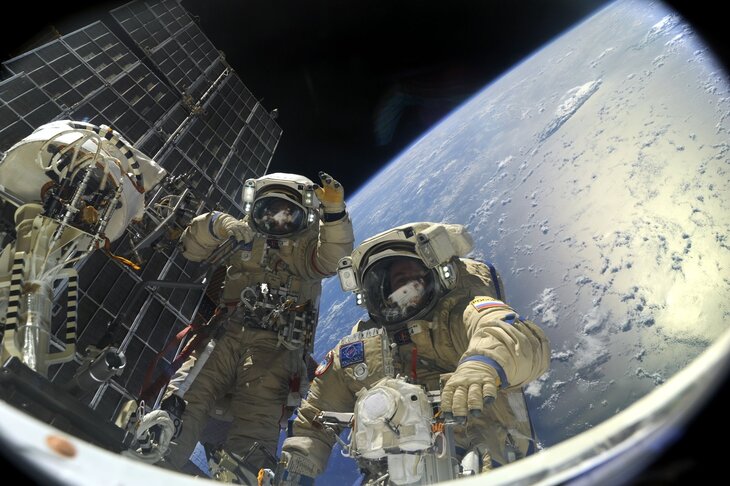 “Observers on Earth see the following picture: doors opened, two clumsy bear cubs in spacesuits, pushed and supported each other, went out into space and crawled slowly but surely somewhere in a given direction, clinging to handrails with falls and trying to do something. important, but not very clear to the audience. In fact, every spacewalk is the result of long and arduous work, “said cosmonaut Oleg Kotov.

Prepare carefully – check the suit, airlock and dock compartment, collect the necessary tools and equipment. The astronauts work out the procedure: they decide who follows after whom, who carries what and returns it. All upcoming space missions are scheduled for several years in advance, each with its own serial number.

To date, one of the most unusual exits from the Russian segment of the station has become the 36th. It took place on November 9, 2013. Then Oleg Kotov and Sergei Ryazansky carried the Olympic torch into space. 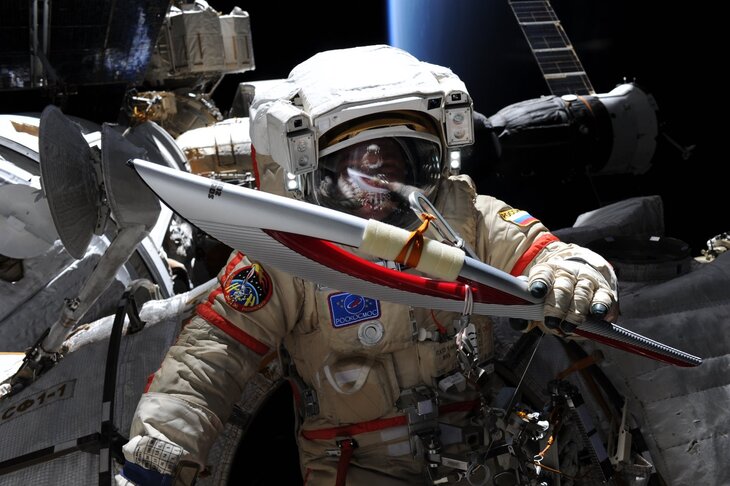