And the Minister of Construction and Housing Vyacheslav Lezhnin assessed the prospects of the new complex: “The construction industry in the region can cope with the current economic reality. I am glad that comfortable residential areas are appearing in the region. It will be convenient for new settlers to live here – a school is being built in the immediate vicinity of the new complex, a kindergarten will also appear – this is the contribution of the state and the region to the future of residents in the city of science.

The other day, officials and townspeople had a chance to see what new things the company Belorussky Kvartal offers to the residents of Obninsk – a new residential quarter opened its doors for a holiday timed to coincide with the opening of the first phase of Cosmos 2.0. Without exaggeration, everyone was struck by the farm – such a well-kept and beautiful territory, which was made according to the author’s project and where the latest innovations in the field of design were used, was not yet in the Kaluga region. But first come first serve.

Behind the protected area opens a truly cosmic view. Residents are greeted by a fountain with clean filtered water. “We are confident that it will be very popular among young residents, especially in the warm season. After all, children will be able to run freely there and swim in the streams of clean water,” said Dmitry Merzlyakov, chief architect of the project.

NW “Belarusian Quarter” presents a modern quarter of comfort class with the author’s concept of landscaping of the adjacent territory. Here, for the first time in Obninsk, a pump track and a bowl have been implemented directly on the territory of the neighborhood – a space for training on scooters, roller skates and skateboards. “Cosmos 2.0 residential complex is a project that has absorbed the most popular developments,” says Irina Zhelengovskaya, head of the Belarusian neighborhood SZ.

For the little ones, they made a playground with interesting structures and swings – there is nothing like it in Obninsk. Nearby there is a “quiet rest area” with stylish ergonomic benches, where mothers can relax while taking care of their children.

Another interesting idea is winding walkways in the style of the Milky Way for leisurely walks for residents. There is a wooded area nearby.

A unique arboretum was created on the farm. Landscaping of the adjacent territory in the first stage was carried out according to an individual project. More than 1,000 trees and shrubs have been planted in the arboretum.

“Cosmos 2.0” consists of 5 queues. The first one is already ready. If we talk about the project as a whole, each stage consists of two buildings and has 264 apartments: seven per floor. Future residents will be able to choose one-, two- or three-bedroom apartments with a modern, comfortable floor plan ranging from 45 to 82 square meters.

But, more importantly, the developer doesn’t just sell square footage. As practice has shown, mainly young families will live in the Cosmos 2.0 housing complex. And they need appropriate infrastructure. Therefore, a kindergarten for 260 places and a school for 1,100 students will appear behind the planned houses on the territory of the inner quarter.

The developer has provided many nuances to make the life of new settlers comfortable and convenient. For example, underground parking for 178 cars. And if someone prefers bicycles to cars, a convenient covered parking was made for them on the territory of the quarter.

A “smart” video surveillance system has been introduced in the new quarter, which has already proven itself in the residential complex “Prosto Cosmos”. Intercoms are installed in all entrance groups of houses and on the fence gates of the complex. The signal from the intercom is transmitted to the apartment owner’s smartphone in a special application.

Throughout Cosmos 2.0, multi-level LED lighting is used using dimming, a technology to control the intensity of the light flow. Presence and motion sensors placed around the perimeter allow the intelligent system to automatically adjust the brightness of the lighting. But that’s not all. A telemetry system is used to collect current meter readings. This modern and convenient solution allows apartment owners not to waste time collecting and transferring information and eliminate errors. The readings are automatically transferred to the management company. They are also available online in a mobile application – residents can check them at any time if they wish. 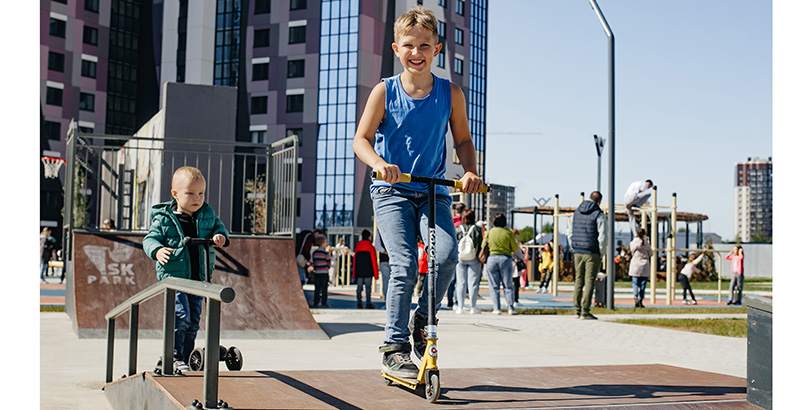