Schematic of the interaction between the solar wind and the Earth’s magnetosphere. Photo: Wikipedia / NASA

Just as water boils and evaporates into steam, the sun also evaporates. Only our star emits plasma at enormous speeds of 300 km/s. It is called the solar wind. It “blows” constantly and is not dangerous for the Earth, since our planet is reliably protected by a magnetic field. Thanks to him, solar particles give life and do not burn out everything on the planet.

But from time to time the geomagnetic calm is broken: spots form on the sun, which merge and create a “short circuit”. So strong that it can be compared to the eruption of millions of volcanoes and dozens of hydrogen bombs simultaneously – up to 160 billion tons of TNT. These are solar flares. At the same time, ionized particles (coronal mass) are ejected into outer space and develop speeds of up to 1200 km/s. It is this phenomenon that causes magnetic storms. Sometimes extremely dangerous.

The Sun is at a distance of about 150 million km, so the disturbed solar wind takes up to 3 days to reach the Earth. During magnetic storms, various phenomena are observed, as the atmosphere, ionosphere and magnetosphere of the planet change simultaneously. Streams of charged particles are produced and inductive currents arise that negatively affect the operation of the technical infrastructure. What about people?

In this matter, the opinions of experts differ, and there is still no clear answer. That is, the electromagnetic field definitely has an effect on a person, but how dangerous is it? This is still being debated.

If the increased activity of the sun only led to headaches or weakness in the body, the discussion would not make sense. But since the 1930s of the last century in Nice (France), a connection between magnetic storms and an increase in deaths among the elderly from cardiovascular diseases was accidentally established. Mortality increased sharply at the time when there were serious interruptions in the work of telephone communication.

In the 1950s, researchers from Germany, Reinhold Reuter and Karl Werner, decided to study the influence of the sun on the increase in the number of accidents and injuries during working hours. After analyzing more than 100 thousand car accidents, the researchers found that the second day after solar flares, the number of accidents increased dramatically. The Soviet forensic expert at the Tomsk Medical Institute Desyatov VP also noticed that on some days the morgues were filled with bodies, while on others they were almost empty. A similar pattern was observed with the number of patients in hospital.

In 1969, when he turned to a familiar physicist, Desyatov found out that the peak indicators exactly coincided with the dates of the sun’s activity. After studying the causes of death of a large number of people, the specialist came to the conclusion that magnetic storms affected the psyche the most. Cholerics and melancholics were found to be extremely sensitive to electromagnetic radiation, but responsive and phlegmatic people suffered little from it.

Interestingly, long before Desyatov’s research in 1928, a British physician, Conyers Morrel, had already made a similar report at the International Congress of Physicians in Dublin. In his work “On the influence of solar storms on murders, epilepsy and suicide”, an English doctor described the connection between solar storms and an increase in the number of deaths on the second and third day after.

On the web, you can find a large number of messages from medical experts that geomagnetic storms should not be underestimated. In most cases, it is said that the increased activity of the sun leads to disturbances in the cardiovascular system, especially in the elderly. Therefore, if you are in the risk zone, it is better to make sure to have the necessary medications at hand.

Interesting facts: fans of conspiracy theories are sure that the Soviet Union collapsed precisely at the moment of maximum solar activity. Studies by geobiologist AL Chizhevsky even suggest that the peak activity of the sun provokes mass revolutionary movements and wars. There is no scientific evidence for this.

Magnetic storms are not dangerous to humans

On the opposite side are those who are sure that people are not afraid of geomagnetic activity. And they have very strong evidence. For example, aircrew and passengers flying near vulnerabilities in the ozone layer are exposed to very small amounts of solar radiation. Nothing threatens their lives, although it should be the other way around.

In addition, permanent flights are safe not only for adults, but also for pregnant women – human embryos are extremely sensitive to the external environment. In addition, the ISS astronauts can safely work in space, since the station is in Earth’s orbit and protected by the Earth’s magnetic field.

Neither doctors nor the media talk about a general “epidemic” of deaths in the subway, and scientists do not conduct mass research on this topic. Therefore, skeptics attribute poor health during the days of solar flares to the banal suspiciousness of people.

It can be discussed with people, but technology suffers a lot

The more humanity electrifies its life, the more harmful geomagnetic storms are to it. During a cosmic storm caused by eruptions on the surface of the Sun, the following phenomena occur on Earth:

Fluctuations in the planet’s magnetic field are measured by different methods: scientists use the disturbance storm time index (Dst), and space weather is expressed for ordinary people in the G index. We’ll talk about that later.

There are five levels of magnetic disturbance on our planet:

Third place. A coronal mass ejection on September 1, 1859. Despite the fact that the electrification of the planet was then very modest, caused by a solar flare, a magnetic storm led to serious consequences. The whole world watched the chaotic northern lights, including the citizens of Cuba, Mexico, Hawaii and near-equatorial Colombia. Residents of Europe and the United States could even read books at night by the light of the northern lights. The storm severely damaged the telegraph system and in some places fires were observed at the stations due to short circuits.

Second place. On March 13, 1989, a geomagnetic storm completely blacked out the largest province in Canada, Quebec, for 12 hours (equipment broke in just 2 minutes). Similarly, the northern lights reached the shores of Cuba, and the power grids in the United States and Canada suffered loss of power in the systems. Disruptions were observed in the operation of the equipment of the space shuttle NASA Discovery.

First place. On November 4, 2003, a record-breaking solar flare was recorded during the entire observation period. By a lucky coincidence, it only partially touched Earth, but this was enough to cut off communication with the spacecraft for 30 hours. And the Japanese satellite ADEOS-2 was seriously battered by the solar wind. Even on Earth, there were interruptions in the operation of mobile and wired telephone communications. 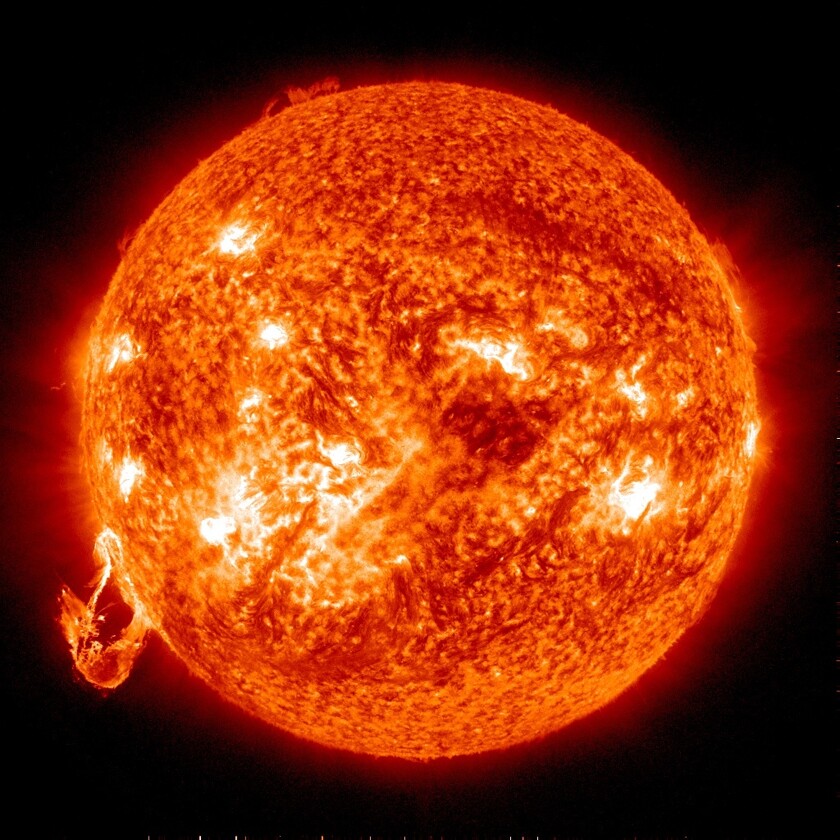 In reality, our planet was often saved by the fact that the ejection of the solar mass did not occur in the direction of the Earth. But sooner or later luck may turn away, and given humanity’s increasing dependence on electricity, the consequences could be extremely sad. However, science does not stand still, and a way will be found to minimize the effects of future magnetic storms.

This is also interesting