NASA said that the main mirror of the James Webb Telescope (James Webb) and scientific instruments continue to cool successfully. This process will continue for quite some time and will not disturb the alignment of all segments of the main mirror.

The cooling system in the James Webb Infrared Telescope is largely passive by radiating excess heat into open space. Before 2000, infrared space telescopes and infrared telescopes on rockets and balloons used forced cooling with liquid helium. Then, with the exception of cooling individual infrared receivers (cameras), designers switched to passive cooling of the working components of infrared space telescopes. “James Webb” in this has become a masterpiece of design thought.

The James Webb Telescope is protected by a huge sunshade the size of a tennis court. The screen reduces the strength of direct solar radiation and solar rays reflected from the Earth and the Moon from hundreds of watts to milliwatts, which are successfully dispersed into space. In addition, a small amount of heat comes from the telescope’s chassis, which is created by the electronics and scientific instruments operating on board. There is no balance between absorbed and dissipated heat yet, NASA says, but over time it will occur.

The agency expects the primary mirror to cool below 50 kelvin (about -223 °C) and the near-infrared instruments to reach temperatures of about 40 kelvin (-233 °C). A mid-infrared (MIRI) camera must be even cooler, so it also has an active heat dissipation system. Importantly, if previously helium simply evaporated in space during the cooling of infrared instruments in space telescopes, then Webb has a closed cooling system installed, which itself can extend the operation of the telescope. The MIRI instrument must operate at temperatures below 7 Kelvin or -266 °C. 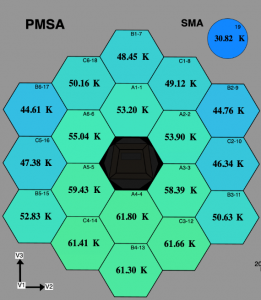 In this image from NASA, you can see the temperature of the primary mirror segments on February 9. The frontmost secondary mirror (SMA) has already cooled to operating temperature, and the segments of the primary mirror are cooled with a noticeable temperature difference. The main segments will cool by another 10 Kelvin each, but the difference of 10-20 Kelvin may remain forever, because, for example, the lower parts of the mirror closest to the sun visor heat up more than those closer to its upper part. The segment setting should compensate for this difference.

Interestingly, at the beginning of the cooling process, some of the instruments on the cold side of the telescope were specially heated to prevent fogging of the working surfaces and the formation of ice. But this stage has long since ended, and all devices are steadily losing temperature. Thus, near-infrared monitors have cooled to 75 kelvin (-198 °C), although it will take several weeks to cool down to operating temperature. In the meantime, the telescope continues to align the key mirror segments, and NASA promises to report on the success of the first week of alignment of these elements in the near future.