Why a telescope is a time machine

And yet it is strange: is there really no one in any of these countless galaxies? Empty? Oceans of stars, planets … and nowhere is there RNA, or, let’s say, any other unknown molecule that reproduces itself?

But the paradox is that even if there is, a fantastic detail must be considered: perhaps in this very image, if the sensitivity of the telescope allowed us to enlarge the image so much, we would see some creatures, but in this case they probably no longer exist where. Or maybe it’s the other way around: it’s not in the picture yet, but now it’s already there. Why is it like that? Because in this photo we see what happened billions and billions of years ago.

How to understand it? You just need to understand the situation with the speed of light. Let’s start simple: it takes eight minutes for light to travel from the sun to the earth, right? So, the moment we saw the solar disk disappear over the horizon, we can safely say that it actually happened eight minutes ago. In other words, the sun is eight light minutes away from us. Now, for example, we look at Sirius at night, we have it in the constellation Canis Major on the right side of Orion. So, Sirius is at a distance of more than eight light-years. That is, the light flies from it for eight years. So we see him as he was eight years ago. And so it is in space.

What exactly did James Webb capture in space?

There are many things, but among all the images received, NASA highlights this. 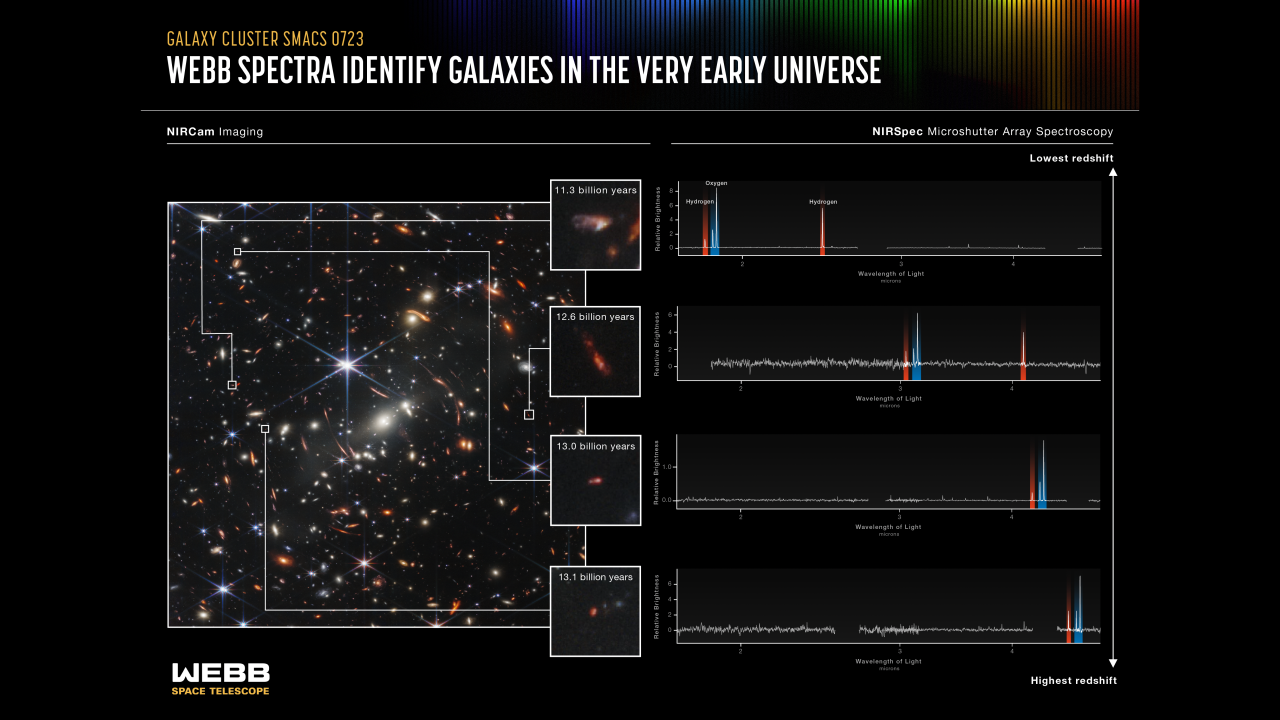 The galaxy cluster photographed by the James Webb Telescope and the most distant galaxies highlighted in the image. Photo © Webbtelesope

In the center of the image you can see a fantastic optical effect: some galaxies appear to be elongated and curved into an arc. This is called a gravitational lens. The attraction of this collective of galaxies bends light coming from farther objects and makes them more visible. That is, it allows us to view more distant space as through a huge magnifying glass.

I have to say, the James Webb Telescope really has unmatched capabilities, it really surpasses Hubble in terms of viewer latitude. In fact, Webb is an infrared telescope, and from the most distant space only infrared light waves reach, that is, very, very long waves. This is because our universe is constantly expanding, the longer, the faster. Why – science is not yet known. But when the light source moves away from us, the light waves coming from it seem to stretch out because of this.

So, astrophysicists have estimated that most of the content in this photograph is about 4.6 billion light-years away. That is, these galaxies were like this 4.6 billion years ago. And now some of them may look a little different. But thanks to the gravitational lens, much more distant objects also came into the frame. And here is the most distant of them – for the sake of simplicity, we called it. This little red dot is a galaxy located in the distance 13.1 billion light-years. In other words, we see what was more than 13 billion years ago.

And here let us actually remember that the universe itself has existed, as is generally believed, a little less than 14 billion years. But at the Max Planck Institute, for example, it is suspected that it is two billion years smaller. In any case, it is clear that we at James Webb see almost the beginning of time. This is a newborn galaxy.

What may have changed since then?

The images from the James Webb Telescope have probably already been seen by the inhabitants of the whole earth, and such fantasies are even expressed on the web: perhaps this galaxy has not been mentioned for a long time? Maybe we see something that no longer exists? The well-known popularizer of science, PhD in physical and mathematical sciences, head of the Department of Physics and Evolution of Stars at the Institute of Astronomy at the Russian Academy of Sciences, Dmitry Vibe, helped life find out.

– It can hardly be said that this galaxy no longer exists, because galaxies live very long, our own galaxy lives the same 13 billion years, that is, from a galaxy’s point of view, this is not a very significant period. There are probably all these galaxies that James Webb observes to this day – he emphasized.

But theoretically, with a telescope you can really see what is no longer there, the researcher said. He mentioned the Andromeda Galaxy as an example. It is 2.5 million light-years away. This means that the light from it flies to us for 2.5 million years. During this time, a lot can change in the galaxy: many massive stars may well survive their prime age and explode in supernovae, leaving black holes or neutron stars (pulsars). It turns out that if we see a star in the Andromeda Galaxy, it is very possible that we see something that is no longer there.

In addition, it can be reliably said that galaxies during the existence of the universe may well cease to exist in the form in which they appeared. They may collide with each other and gradually merge, creating a new, more massive galaxy. By the way, that’s exactly what our own Milky Way is waiting for – right now an adjacent, much larger galaxy, the Andromeda Nebula, is approaching, very, very slowly.

According to estimates by astrophysicists, they will meet in about 4.5 billion years. It is unlikely that this threatens humanity with a catastrophe, because even if we reach such a time (which honestly is unlikely), then the sun will have depleted its thermonuclear fuel supply, it will begin to expand and turn into a red giant, absorbs one after the other Mercury, Venus and, very possibly, Earth and Mars. Therefore, the luminaire will “empty” and become a white dwarf with lifeless gas giants circling it alone. But who knows: maybe humanity will settle on the solid satellites of Jupiter and Saturn?

In the middle of the Milky Way and in general, apparently, any spiral galaxy is a black hole with a mass of four million suns. If you are wondering where she is in the sky: she is in the constellation Sagittarius, which is why she was named Sagittarius A *. And all the spiral arms of our galaxy circle around it, of which it has four largest and several smaller. Consequently, along with the solar system, which settled in Orion’s barely noticeable arm. The sun, together with all its planets and with us, makes a revolution around the center of the galaxy in 220 million years. This means that a revolution then on earth was the beginning of the Mesozoic era. So this rotation creates the impression that our galaxy is being drawn into some form of cosmic vortex. But in fact, as the astronomer explains, this is not the case at all.

Will it ever end? And how will it end? In any case, spiral galaxies will retain their current appearance much longer than the universe exists, that is, tens and tens of billions more years.

– This will continue for a very long time, but there is a certain limit, because everything tends to chaos, to some most symmetrical shape, and our galaxy also tends to be spherically symmetrical, so that it does not have a disk, spiral branches, but it here is a terribly long process. When it ends, we can not even imagine. But theoretically, a spiral galaxy should eventually turn into a symmetrical spherical object, similar to globular clusters, – explains the scientist.

If we could live up to this and see this, what would we see? Pretty boring picture, the astronomer assured. Until then, only red dwarfs will survive – the stars are very dark and cold, and in the sky there will no longer be such, as Dmitry Zigfridovich put it, “happy variety” of bright stars, as now. Hence the conclusion: we appeared in a young, full of vitality universe. 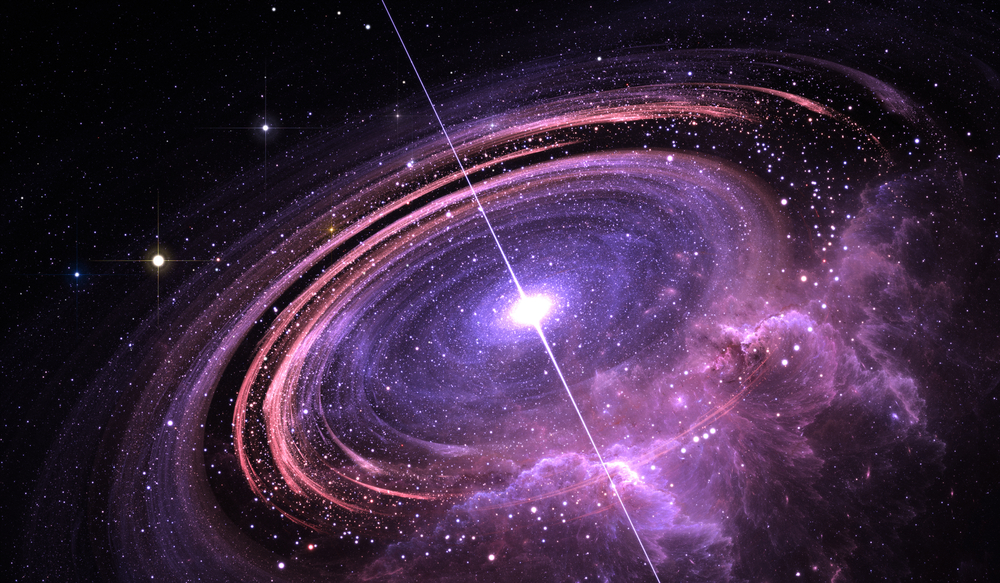 What’s next for the universe?