– Always remember America: there is a part of the territory – Alaska. We have something to give back. They propose to hold a referendum there, – Recently, the President of the State Duma, Vyacheslav Volodin, reminded the United States that Russia can retake Alaska. The referendum was proposed by Vice-President Pyotr Tolstoy.

And in Krasnoyarsk there were banners with the inscription “Our Alaska”. The banners were placed by the local Alyaska trailer factory. Such banners in Siberia are not accidental: after the discovery of Alaska, by decree of Paul I, the peninsula was transferred to the administrative control of the Russian-American company (RAC), whose headquarters were located in Irkutsk.

This trend was also noted by the British media: an article appeared in the Sunday Times, whose authors claimed that Russia after Ukraine would also return to Alaska. And this idea is not as great as it seems at first glance.

The price of Russian America

Russian America was part of the Russian Empire for 135 years – from its discovery in 1732 until its sale on October 18, 1867, when Alaska was officially transferred to the United States. On the Russian side, the transfer protocol was signed by a special government commissioner, Captain 2nd rank Alexei Peshchurov. The handover ceremony took place in Novoarkhangelsk (now Sitka). The day of the formal transfer of the territory, the lowering of the Russian flag and the raising of the American flag is considered a national holiday there, Alaska Day.

The peninsula was sold for $ 7,200,000. That is 4.74 cents per hectare. If we take into account the exchange rate of the US currency for gold, in terms of modern money, it is about half a billion dollars. The amount is generally small given the amount of natural resources in the region. Just 30 years after the sale, gold was found near Canada’s Klondike River, triggering the famous gold rush. And so they found oil and gas here. 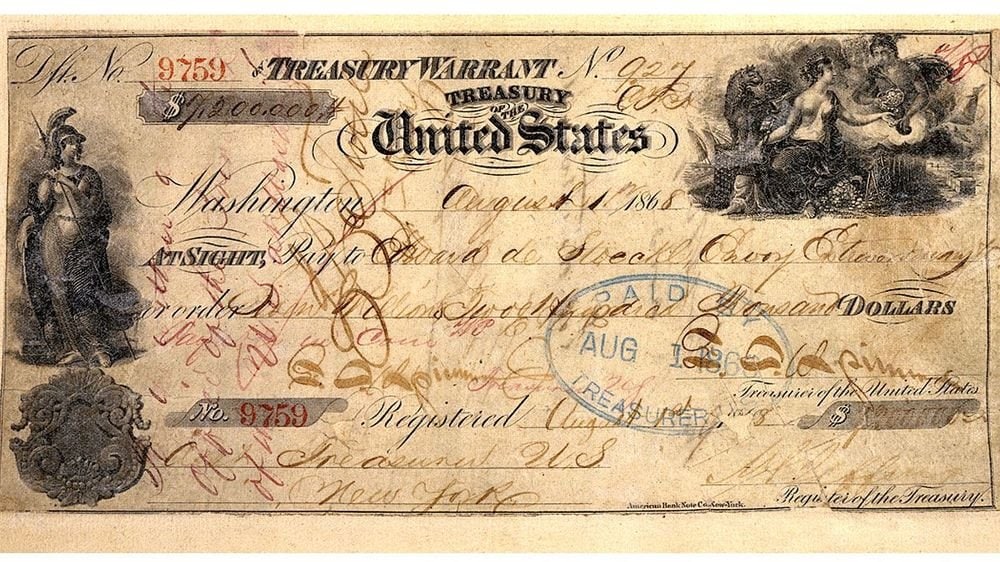 A check for the purchase of Alaska worth 7.2 million dollars, sent to the Russian Embassy in the United States in the name of Eduard Andreyevich Stekl 1867. Photo © Wikipedia

Interestingly, Russian Ambassador to the United States (North American United States) Eduard Stekl kept the initial 7.2 million 21 thousand for himself and spent 144 thousand on lobbying as bribes to senators who voted for the ratification of the treaty. At the time, Alaska was simply considered an “ice island.” U.S. newspapers critical of the deal wrote:We bought a polar bear zoo“Historical fact: The New York District Courthouse in downtown New York cost the New York State Treasury more than the whole of Alaska cost the U.S. government.

Alaska was Russia’s only major possession off the Eurasian continent. After mastering it, the Russian Empire reached the peak of its expansion in the 1860s, and after that it lost only territories.

Nicholas I’s policy completely ruled out the sale of territories.

– Where the Russian flag has once hoisted, it should not go downthought the emperor.

But under Alexander II, the situation changed: the then authorities considered it unprofitable to develop such a remote and almost deserted territory. This was mentioned, for example, by the Governor-General of Eastern Siberia, Muravyov-Amursky.

After the Crimean War, the Russian Empire needed money. In 1861 alone, serfdom was abolished in Russia, and to compensate the landowners, the government borrowed £ 15 million from the Rothschilds at 5% per annum. As the deadline for returning funds approached, people in power circles were thinking about where to get them from. 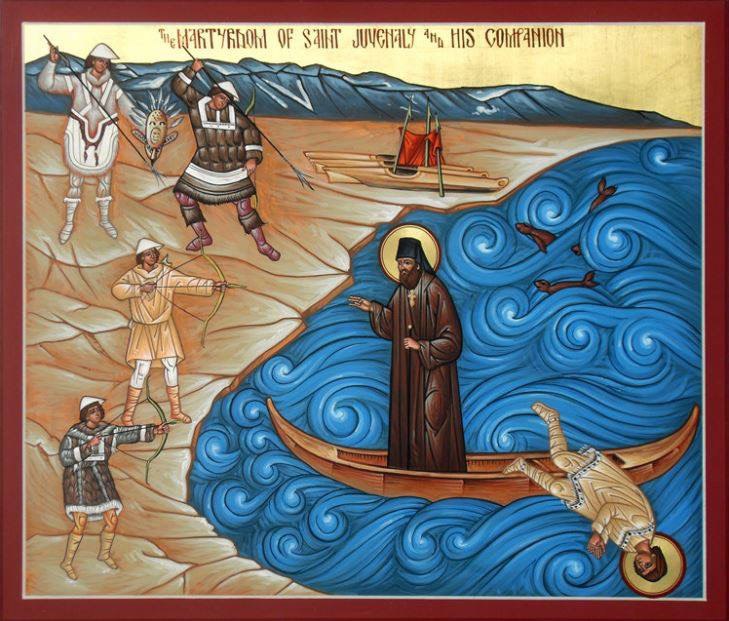 Icon for St. Juvenaly shows how difficult it was for the Russians to conquer Alaska. Photo © Telegram / Ortega

In addition, armed poachers roamed the waters of Alaska, and the Tlingit Indian tribe occasionally attacked Russians and friendly Aleuts. In addition, the peninsula was threatened by Britain or the United States, so in the event of a war it was not possible to hold the territory.

Although Stekl received a check from the United States, he did not receive any money, as all payments were made through trusted banks. The money was transferred by mail order to the Barring brothers’ bank in London, where the senior family’s funds were kept. 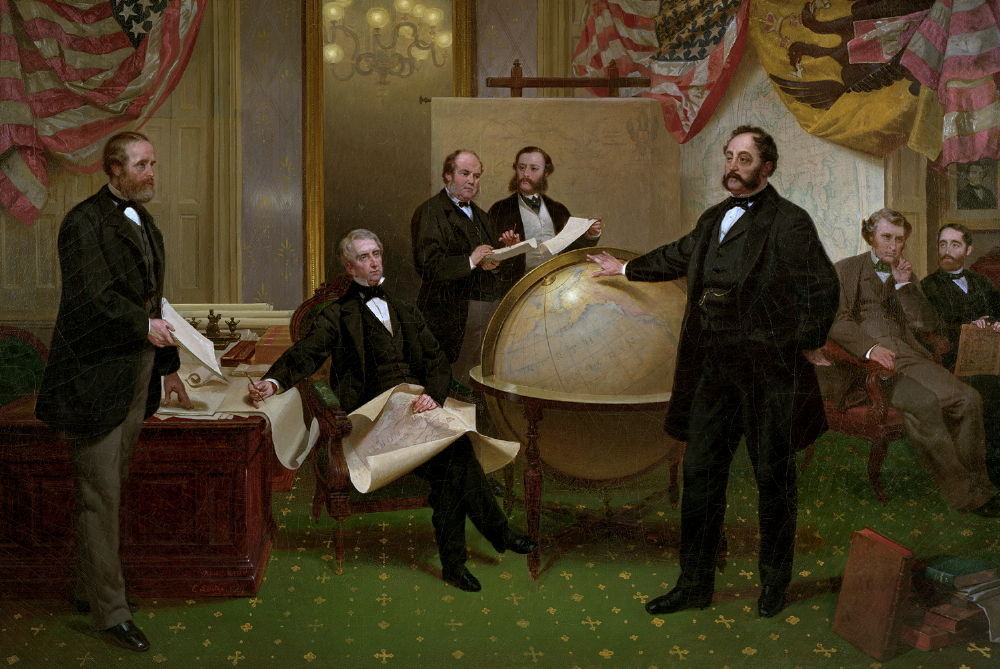 According to contemporary memoirs, the money fell into the hands of trusted people by Grand Duke Konstantin Nikolayevich and Finance Minister Reitern. Their further fate is unknown. The archive contains a document from the Department of State Treasury, which states that 11,362,481 rubles 94 kopecks were received from the states for the sale of foreign property. The funds are alleged to have been spent abroad on the purchase of railway accessories: Kursk-Kyiv, Ryazan-Kozlovskaya, Moscow-Ryazanskaya, etc.

There is a widespread historical legend that in London money for Alaska was loaded in the form of gold bars on the bark of Orkney, which went to St. Petersburg and sank in the Baltic Sea in July 1868. According to legend, researchers from a joint Finnish-Soviet expedition in 1975 found the remains of a ship in the Baltic Sea and explore them. There must have been an explosion and fire on the ship. But not a single gold ingot was lifted from the bottom of the sea, which could indicate a skilfully executed sabotage that hid the theft.

Today, Alaska is a strategic point for protecting the interests of the United States, the Indo-Pacific and the Arctic, for influence where the Cold Hybrid War has recently been going on. At the same time, Alaska is a very stubborn Republican state. And here politicians sometimes express pro-Russian sympathies. For example, Craig Fliner, an adviser on the Arctic policy of the state government of Alaska, stated several years ago that the region could be more developed if it were under Russian rule. 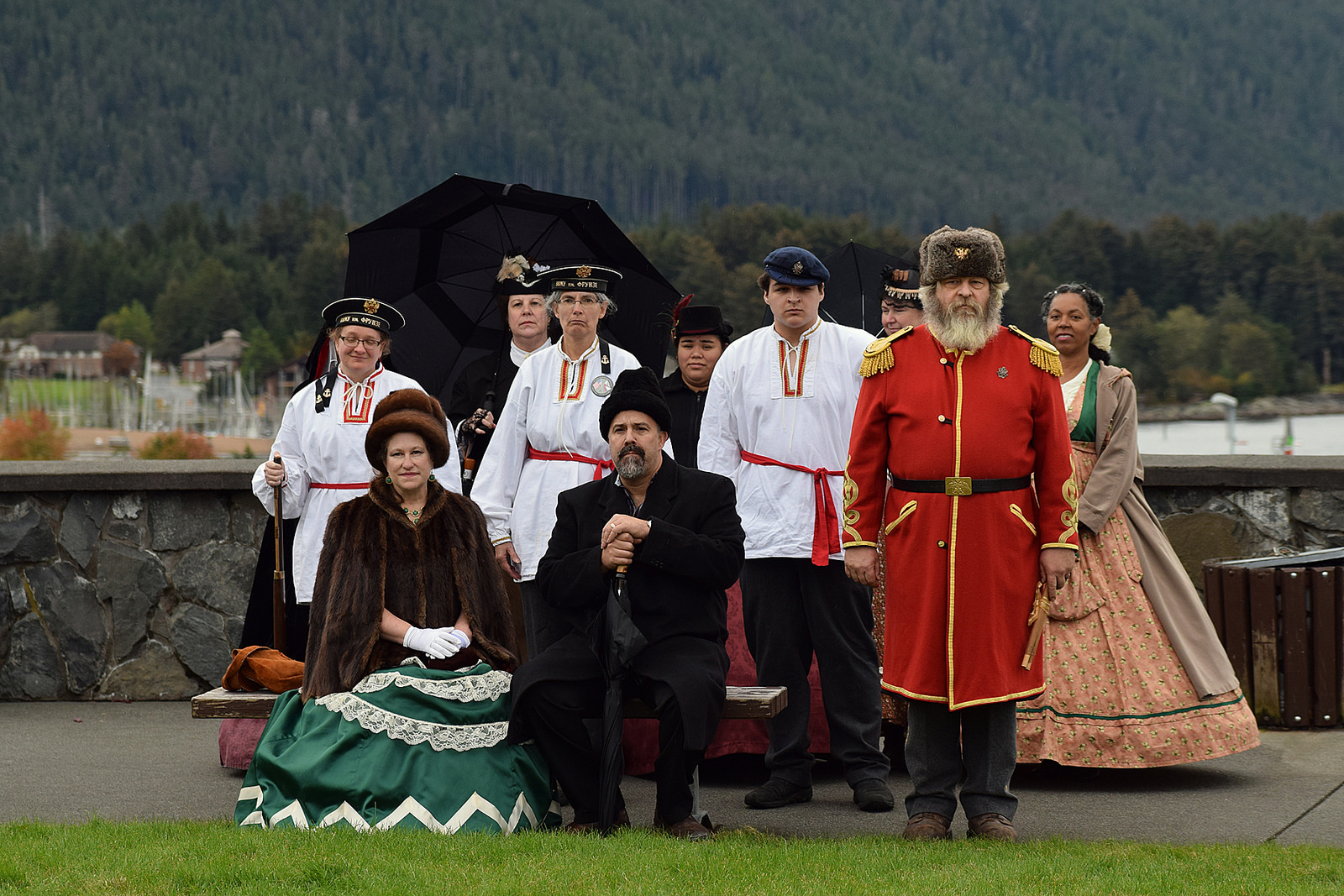 Sitka people in period costumes are waiting to play their part in the handover ceremony at the top of Castle Hill in Sitka. Photo © Flickr / US Army Alaska (USARAK)

Despite the released campaign to abolish Russian culture, Alaska continues to remember the Russian past: in April, the city council of the region’s capital, the city of Juneau, refused by five votes to four to sever sister city ties with Vladivostok. About 10% of the state’s population are Orthodox Christians, which is at least one in three residents with Indian roots.

Speculations in oil and history

The population of Alaska is only 740,000 people, about the same as Togliatti. The state does not benefit the federal government and is still the most subsidized in the country. 90% of Alaska’s oil revenues remain in the state.

The Alaska Oil Fund is $ 64.6 billion. Each Alaska resident receives an annual share of the fund, approximately $ 1,500 per person. This is not so much, given the number of inhabitants and local prices. In addition, money is issued with a number of conditions, for example, applicants for a share of a dividend can not be convicted before. 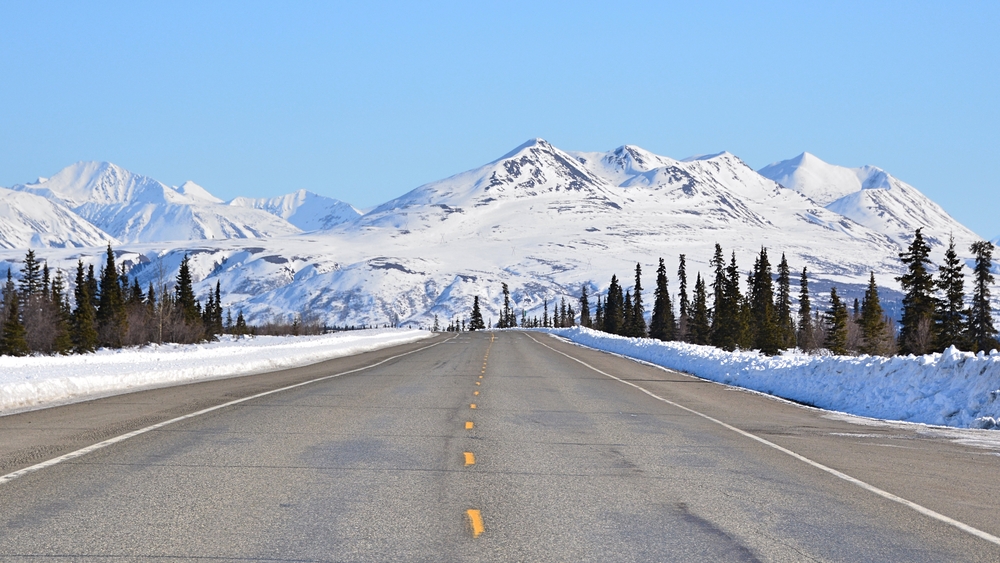 In May this year, US President Biden’s administration refused to rent out areas in Cook Inlet in southern Alaska, where huge oil and gas reserves were found. The decision to shut down more than one million hectares of hydrocarbon production came when gas prices hit another ceiling.

Washington’s distrust of Anchorage is not only apparent in this. Here, as in Ukraine, monuments are demolished over Russians. In 2020, a number of public organizations voted on the monument to the founder of the city and the ruler of Russian settlements in America, Alexander Baranov, who reconciled with Tlingit, built fortified settlements, founded a shipyard and established relations with the United States. But some in Alaska believe that Baranov is alleged to be responsible for “the murder, enslavement, rape and genocide of the indigenous people” because he once recaptured a fortress built by Russian settlers from the Indians. Six city council members supported the proposal to remove the memorial from the city center and only one opposed it.

During the Soviet era, the combined army of troops stationed in Chukotka, which was disbanded in the 1990s, was ready to provide assistance to the fraternal people of Alaska. The Russian Navy is currently organizing tactical military exercises near Alaska. And the aviation business is only growing. 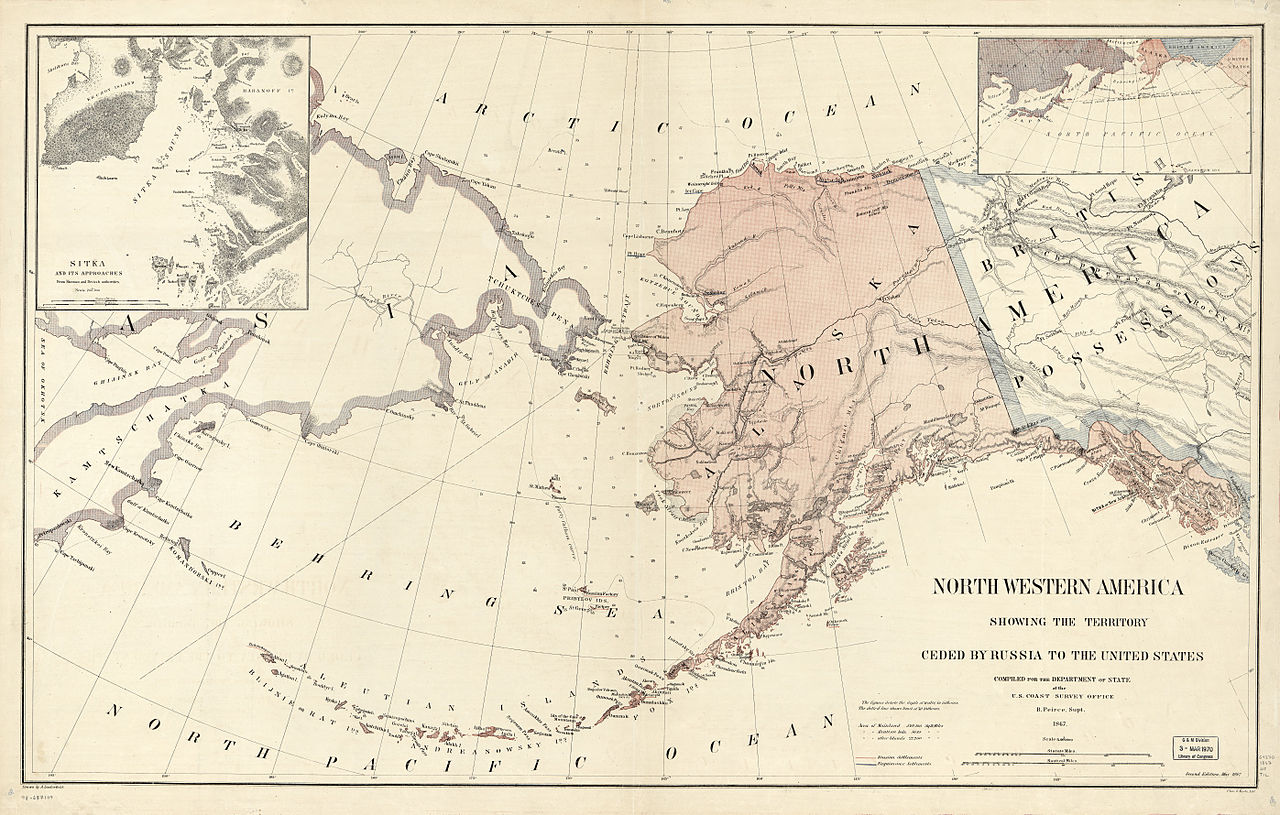 Map of the territories of Northwest America transferred by the Russian Empire to the North American United States in 1867. Photo © Wikipedia

Is Alaska likely to return to Russia?